After finishing Stephen King’s 11/22/63, I have a compelling urge to go back and reread some of his earlier works, particularly It 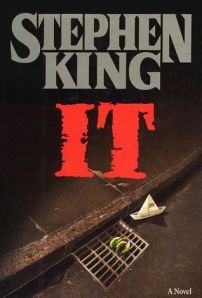 , which King’s narrator Jake references in 11/22/63. There’s a wonderful interconnected feeling in King’s fiction, which has only become stronger with every additional novel. King’s collaborator and close friend Peter Straub (Straub’s website) also writes amazingly interconnected works of fiction, which also make my reread list, especially the meta fiction of the Blue Rose novels, and his collaborations with King, the Talisman novels.

And then I watched the movie of Tinker, Tailor, Soldier, Spy and I think I’d like to reread John  le Carré’s Smiley books, too (John le Carré’s website).And then I was thinking about other books to reread, and Julian May’s interconnected series – Pliocene Exile, Galactic Milieu, and Intervention – are on my list as well. So my reread list is growing.

Sometimes, I will reread an Agatha Christie mystery – I find them so comforting and entertaining, and since I have read them over and over since I was a kid, it takes me no time at all to enjoy one. I know some readers never reread works they have already experienced, but I find that rereading novels often gives me a deeper experience. I notice symbolism and thematic points that I may have missed the first time around. And since my mind is not preoccupied with the plot machinations, I have time to ruminate on the broader meaning of an author’s work. Do you reread books? What would make you pick up a book you have already read? If there are works that you read over and over again, please let me know what they are, and why you reread them. I’d love to know.

I find it interesting that many readers who don’t regularly read science fiction, do read Stephen King’s novels that are categorized as scifi. King’s novels The Running Man (originally published under the name Richard Bachman), Cell, The Stand, and Insomnia are what I would call “soft” science fiction, that is, scifi without a heavy reliance on scientific description or concepts. The novel 11/22/63 is a perfect example – a novel that went to the top of the bestseller lists, and stayed there for 17 weeks, yet it is a novel that starts with the revelation of a time travel portal.

But, of course, it’s more than just a story about a time traveller trying to change history. It’s about doing a bad deed in order to accomplish a greater good. It’s about the “butterfly effect” that time travel stories often discuss. It’s a heartwrenching love story. It’s a story of inspiring others to do great things.

The plot is long reaching, and takes time to develop, but it doesn’t meander. The main character, Jake Eppler, is given a task by his friend Al Templeton, who has discovered a time portal to 1958 in the storage room of his diner. Al convinces Jake to travel to 1958, and stay there until 1963 to prevent the assassination of John F. Kennedy, which Al has determined to be the precise moment that the US started down a bad path. Jake agrees, after he travels to 1958 and is able to prevent the murder of a local family. Al has kept copious notes about his time traveling adventures, where he gathered details on the daily activities of Lee Harvey Oswald and his associates. Jake travels back in time, and makes his way to Texas, where he finds work as a high school English teacher.

Jake blossoms and discovers a zest for life in Texas of the early sixties that his life in 2011 had never given him. He finds love with Sadie – the librarian at the high school, and satisfaction in his work, and companionship in the small town where he settles. But Dallas, 1963 is always hanging over his head, and his preparations for that day in Dealey Plaza begin to dominate his life, upsetting his love life and happiness.

I thoroghly enjoyed this novel. King has a gift for creating characters that you could swear you had already met. They are believable, and react in realistic ways, even when placed in a strange, time travel fantasy. As always, King’s writing communicates  a rich world, this time the US in the late fifties and early sixties, where, to Jake the world is “full.”

This fifty years-gone world smelled worse than I ever would have expected, but it tasted a whole hell of a lot better. Stephen King, 11/22/63, p.38

King gives the reader a few key phrases to hang onto in this novel. First,

The past is obdurate.

King ends the novel on a perfect, sweet-sad note that moved me to tears. Highly recommended.