Quite possibly the most gross-out scenes I’ve ever read happened within the pages of this novel, Big Brother, by Lionel Shriver. Disgusting and horrifying, funny yet excruciating, Shriver doesn’t shy away from showing the reader the consequences of morbid obesity. Shriver wrote this novel as a response to events in her own life. Her older brother, whom Shriver has described as being a “genius,” was morbidly obese, and died of a heart attack at age 55. Big Brother is dedicated to him. But calling Big Brother a novel about obesity doesn’t begin to describe this book. 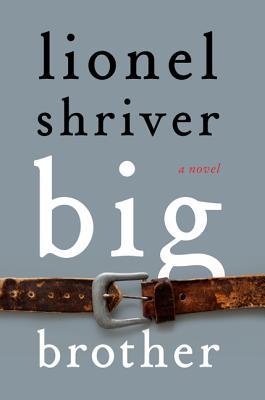 Shriver uses obesity as a pathway to explore familial relationships and responsibility. How far would you go to “save” a sibling who has “buried himself in himself?’ Would you sacrifice your marriage, relationships with your children and friends to devote yourself to a sibling’s overwhelming needs? Are we truly our brother’s keeper?

That’s the decision the main character of Pandora confronts. Her brother Edison, whom she idolized, visits Pandora and her family. He’s down on his luck, couch surfing in New York City. He also has gained more than 200 pounds since the last time Pandora saw him. A jazz pianist, Edison punctuates his conversation with annoying, jarring “hep” talk – heavy cats, ya dig, man? He’s overbearing, obnoxious, and eating them out of the house. Plus, Pandora’s husband Fletcher, cycling nut and food Nazi, can’t stand him. It doesn’t help that Edison breaks one of Fletcher’s fanciful furniture creations. The visit is a trial for the whole family – Pandora, Fletcher, and Fletcher’s two teenage kids from a previous marriage.

Pandora faces her responsibilities to her brother when the visit comes to an end. Does she put him on a plane, knowing he has nowhere to live, no gigs lined up, and few friends left? Pandora proposes a private weight loss clinic to Edison. She’ll be his coach, plan his weight loss and stick with him until he’s down to his normal weight. This project will require living apart from her family – Fletcher will not have Edison in the house any longer than his planned visit – and this threatens Pandora and Fletcher’s marriage, and Pandora’s relationship with her stepchildren.

The characters in this novel are not especially likable. Fletcher and Edison are both obnoxious and self-righteous, convinced of their superiority and their claim on Pandora. I found Pandora fascinating. While claiming to avoid the spotlight, she has managed to run two successful businesses, the most recent a novelty toy company featured in national publications. Her musings on her relationships and how much is owed to family members was fascinating. Pandora neglects her younger sister, yet feels a strong duty to her step children. And Edison’s obesity throws her sense of responsibility into overdrive, jeopardizing her marriage.

Shriver seems to be pulling the novel into a tidy happy package, and then upends it all. I won’t reveal the ending here…

Shriver sums up so many themes in this quote from near the end of the novel:

However gnawing a deficiency, satiety is worse… We are meant to be hungry.

Shriver, while using obesity to explore familial relationship, also explores contemporary thoughts and perceptions of obesity. Pandora mulls over society’s stereotypes of the obese and the slim. Are thin people joyless self deniers? Are the obese lacking in character strength? Shriver can be heavy handed, but I’ll forgive her “hunger” to impart her hard earned lessons about family and obesity.