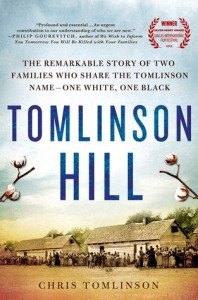 Tomlinson Hill by Chris Tomlinson recounts the history of the Tomlinson families of Tomlinson Hill, Texas – one a privileged white slave holding family, and the other family, the slaves that took the Tomlinson name. Tomlinson begins the book with the migration of the white Tomlinsons from Alabama to Falls County, Texas with their slaves walking the distance as the masters rode.

This book was tough going for me at the beginning – so many battles, so many acreages, so many names to process and keep straight.

I’m glad I stuck with Tomlinson Hill past the difficult battle passages. The parallel history of the two Tomlinson families is a compelling story of race, privilege, and bloody Texan history. Much of this history is painfully sad and grim, particularly the determined, evil way the whites were able to entrap the freed slaves into the virtual slavery of the sharecropping system. The North may have won the war, and passed the Emancipation Proclamation, but the Southern white landowners controlled the ballot boxes and ruled by intimidation and terror.

The final chapters detailing the author’s own experiences and LaDainian and LaVar Tomlinson’s experiences are superb. It took the black Tomlinson family 4 generations to get out of the racist manual labor system of Texas. Their experience was reflective of the African American experience in rural Texas. As white landowners mechanized farming, the former sharecroppers and farm workers were hard pressed to find work, and the “separate but equal” education system kept them in their place. Their white counterparts – even the relatively unsuccessful and uneducated – never faced the brutal poverty the black Tomlinsons did, even after declaring bankruptcy.

This book is an indictment of Texan culture, which unbelievably, never elected an African American to statewide office until 1990. 1990! Another fact that astounded me was the “rebranding” of Texas as a western state. My impressions of Texas as a cowboy Western state are the product of a conscious rebranding effort to avoid discussing the shameful slave holding past. Tomlinson dispels many of the myths we were fed as school children regarding the south. “They didn’t know better” and “they didn’t understand what they were doing” get quickly debunked with editorials published in Texas newspaper before the  Civil War.

The author, Chris Tomlinson, discusses his experiences as a child with government ordered desegregation of the school system. I found these chapters fascinating, as I attended schools in Wilmington, Delaware that were also ordered to desegregate by the landmark decision of Brown vs. the Board of Education. I saw so many of my peers packed off to private and parochial schools, compounding the desegregation issue and preventing meaningful integration with white flight and fears of the “not like me.”

My experiences were much the same as Tomlinson’s. Yes, there was a lot of upheaval in the local schools. Yes, there were different standards in different schools that compounded problems. But, there was sincere reaching out and healthy interaction that outweighed so much of the negative. My teacher that year was Ed Sherrill, an educator in the Wilmington public school system, and he was the first African American teacher I had ever had. He was tall, with a booming voice, was my homeroom teacher, taught social studies, and I loved him. Meaningful integration of our schools is the only way we are going to succeed as a society.

I do have a warning: the chapters dealing with the Ku Klux Klan are difficult.