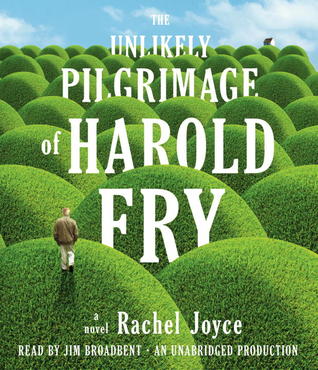 I know that a movie will be made of the book I just finished, The Unlikely Pilgrimage of Harold Fry by Rachel Joyce. I know it will be sentimental, funny, and undoubtedly, freakishly maudlin. And that’s a shame, because while this book does veer into sentimentality, it is never maudlin.

The premise of the book is outwardly quiet and simple: Harold Fry, recently retired, receives a letter from an old friend, Queenie Hennessy. She is in hospice, dying of cancer, and wished to say goodbye, and thank Harold for his friendship. Harold writes a letter in return, and heads out to the post box to mail it. But he keeps going. Initially he continues because he feels his letter is inadequate, and then, after a conversation about faith with a young woman at a garage, decides to walk to the 500 hundred miles north to Queenie. His faith in his walk will save her.

While walking, Harold meets many people who share intimate details of their lives with him. He attracts attention and becomes a bit of a celebrity. His wife, Maureen, however, is not amused and just wishes Harold would come home.

While Harold’s feet carry him north toward Queenie, he makes another pilgrimage through his mind and memory. Harold revisits painful memories, and recalls the events that led him to his current humdrum life, curiously removed from his wife and other people.

In this pilgrimage of the mind is where the magic of this book happens. Joyce is able to convey Harold’s inner pain, his utter anguish, and regret in such a way that I was very deeply moved. Through his pain, Harold grows to understand himself better, and catches glimpses of the inner beauty of others:

He understood that in walking to atone for the mistakes he had made, it was his journey to accept the strangeness of others. As a passerby, he was in a place where everything, not only the land, was open. People would feel free to talk, and he was free to listen. To carry a little of them as he went.

And this interior life, so richly described by Joyce, will never, ever be honestly conveyed on a movie screen. There will be flashbacks, and memories retold to others, but a film will not be able to capture the complicated progression of Harold’s thoughts.

Joyce walks a fine line with her novel. The Unlikely Pilgrimage of Harold Fry could have descended in to the hyper emotionalized realm that is usually the domain of “chick lit,” but the novel remains poignant. Chick-lit novels tend to make me angry in the way they manipulate my emotions, but I never felt this way with Harold Fry. Instead, I was consistently and deeply moved through the book.

I highly recommend the audio version of this novel. Jim Broadbent is the reader, and he is a gifted interpreter of the text.